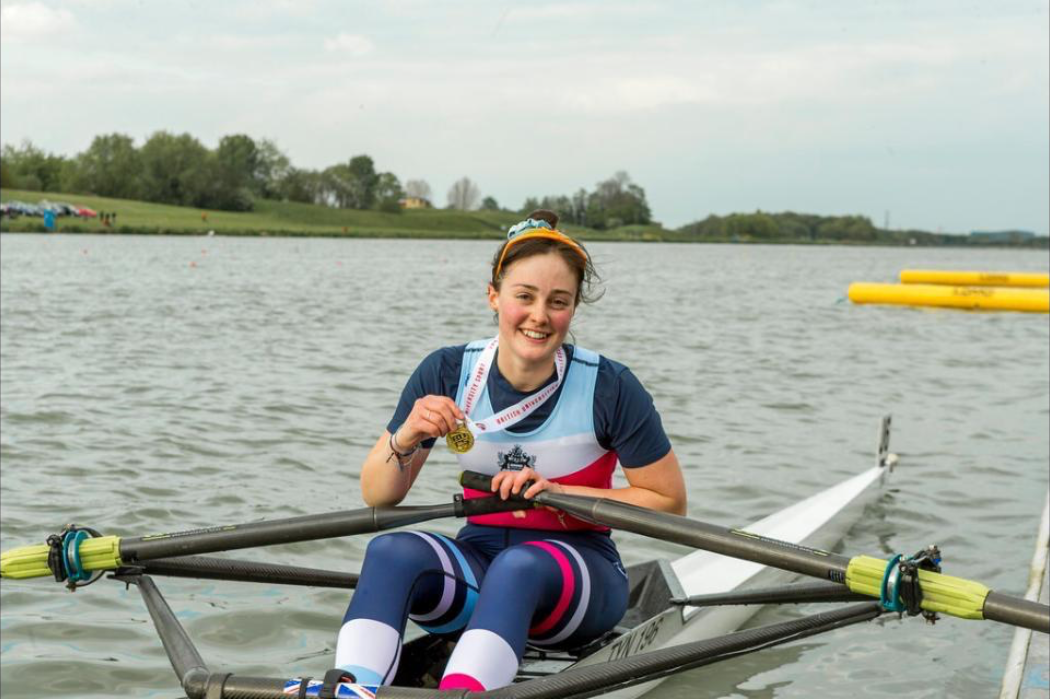 I first started rowing when I was 10, in 2010. I wanted to start because I had done canoeing during a school trip in middle school and I thought I was good at it so wanted to try it more. However, my mum signed me up for a rowing course instead of canoeing and I was hooked. Since the age of ten, I’ve trained and competed every year, in increasing amounts and I’m still in love with the sport as much as I was when I first tried it.

A typical week for me starts off with an hour rowing on Monday morning at 6:30, after which I go into uni from 10-4. I then have a low intensity evening session on the rowing machine that lasts between 1-2 hours. On Tuesday I either go and work in my studio at Chelsea or I go to my local library to work. In the evening I have another session on the rowing machine, this time at a much higher intensity, lasting between 1 to 1-and-a-half hours. Wednesday starts with a 6:30 am water session, followed by working from home until 1pm when I go and coach rowing at a neighbouring club, then do a strength and conditioning session in the evening. Thursday mornings I head into Chelsea early and either have a tutorial or sit in my Studio or the Library and work. In the evening I either do a run or a static bike and a session on the rowing machine, then most Fridays are off or low intensity and I catch up on admin and visit art shows for context in my own practice. Saturday mornings start with a long row at 6:30am, followed by another strength and conditioning session and more coaching. Sunday mornings start off the same, with another long row at 6:30 then either a 90minute bike ride or static bike depending on the weather. Weekend afternoons are used for catching up on sleep, socialising, reading for uni and preparing for the week ahead.

The sporting achievements I’m proud of have been the races where I competed for Newcastle University, known for its brutal training program, during my foundation year as well as every race I did representing the small club I learned to row at as a junior.

My greatest achievement in rowing that I’m most proud of so far has been winning at BUCS regatta for UAL in 2019, as many people told me I wasn’t good enough and I had to prove myself numerous times just to be able to compete, therefore when I won it meant so much to me and it was even more special being one of the first to represent my university in rowing.

My goals for this year are to continue the solid year of training I had last year, and keep improving on my personal best times on the rowing machine. I want to compete at BUCS regatta again, this year in the championship category and qualify myself for the European University Games in the summer. As a member of the squad at Thames Rowing Club I’m working to make some competitive crews and win at the big local races throughout the year.